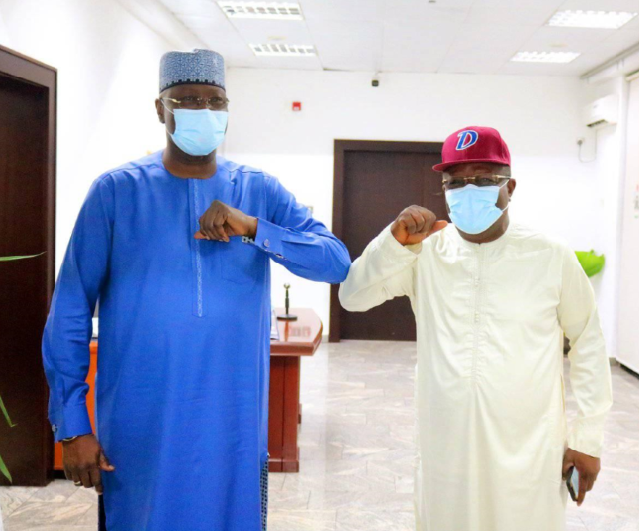 The Federal Government has assured the Governor of Ebonyi State of the commitment of President Muhammadu Buhari to boost infrastructural development in the State.

The Secretary to the Government of the Federation, Boss Mustapha, gave the assurance when the Governor of Ebonyi State, Engr. David Nweze Umahi, paid him a courtesy visit in his office.

The SGF thanked the Governor for setting the pace through his defection to the governing party, which has opened door for more defectors to the party.

He therefore assured him of Federal Government’s commitment to ensure that his state benefit from its infrastructural development which is one of the key agenda of President Muhammadu Buhari.

According to him: “And I want to assure you that the Office of the Secretary to the Government of the Federation would collaborate with you at every level to ensure that at least we offer all the support to your government so that the confidence you have reposed on Mr President, by switching over. And you can see, your defection has caused other two governors to defect and there still more coming so we're still counting. Because you are been a pacesetter in this regard, we'll try to do as much as we can to ensure that at least the state of Ebonyi, through collaborative effort is taken to a greater height in terms of infrastructural development, in terms of the benefits and the dividends of democracy getting to the people”.

The SGF stated that it was time to build bridges of unity and purposeful leadership across the country, and the Governor exemplary leadership has made him a bridge builder across all the divides.

Earlier, the Governor of Ebonyi State, Engr. David Nweze Umahi, commended the exemplary leadership of the SGF for serving as a unifying force to the nation and his effort in stemming the tide of Covid-19 pandemic in the country.

The Governor said he owed his developmental feats in the State to the support he has been receiving from President Muhammadu Buhari and the SGF. He promised to continue to collaborate with the Federal Government to bring more development to the State.