FG Assures of Security Across Nigeria 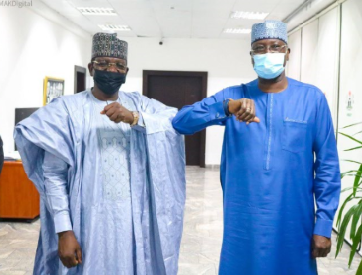 The Federal Government has reiterated its resolve to unveil a comprehensive work plan to overhaul the nation’s security architecture in order to stem the tide of insecurity across the country in line with the Next Level Agenda of President Muhammadu Buhari.

The Secretary to the Government of the Federation, Boss Mustapha, made the disclosure when the Governor of Zamfara State, Bello Muhammad Matawalle, paid him a courtesy visit in his office. The SGF assured Nigerians that federal government is marshalling out a work plan that would mitigate the rising insecurity across the country. In his words: “I went to Zamfara about two weeks ago, And you could see the level of arable land that was available and the cultivation that was going on, but It's been slowed down as a result of the security challenges. But I can tell you that the federal government is putting up a comprehensive work plan to deal with all forms of insurgency across the nation. It's not only Zamfara experiencing this, but also in most states in the northern part of the country have one or the other. But you can see that it's pacifying gradually, and I believe that with a collaborative effort that we're putting in place, will definitely ensure that Zamfara gets out of the woods and takes its appropriate place on the path of development and sustainable growth in this country”.
He thanked the Zamfara State Governor for his defection to the governing party and attested that his progressive ideas would go a long way to place the state on the pedestal of sustainable development.

He stated that Zamfara holds the key to Nigeria’s future considering its enormous mineral deposits, expanse of arable land for farming & human resources. He promised to work with the State Governor to ensure peace and development is sustained in the state.

Earlier, the Governor of Zamfara State, Bello Muhammad Matawalle, thanked the SGF for supporting the policies and programmes of President Muhammadu Buhari in the attainment of the Next Level Agenda. He promised to work with the federal government so as to bring development to the people of Zamfara State.

He said that Zamfara State, like other states, has been battling with the surge of banditry which has affected the economic fortunes of the state. He assured that the work plan by the federal government on insecurity would go a long way to mitigate the rising cases of banditry and other criminal elements in the state.